Robbie was a talented four-year track and cross-country star at North High. Born and raised in Oildale, he set school records in the mile, the mile relay, the two-mile relay and a cross-country home course record. He was a two-time League champion in cross-country, and SYL and Area champion in the 2-mile run in both his junior and senior seasons. He qualified for the State meet both years. Robbie attended BC and set the school record in the 10,000 meter run in 1977. It still stands today. Robbie attended Cal Poly SLO after BC and was part of a D-II National Championship Cross-Country team and named All-American in the process. He has been an elementary school principal for the past 30 years. 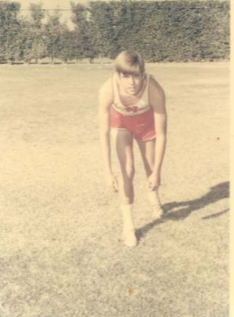