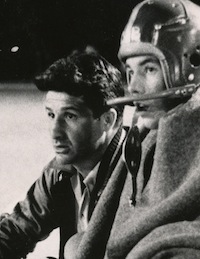 When Turk Eliades took over the North High football program at the newly opened school in 1953, he was handed a brand new team made up of “slow white guys”. One year later the Stars-with no seniors–won the Valley Sierra Division Championship, and Coach Eliades continued coaching and teaching at North for over 30 years. During those years, his teams won eight league championships outright and shared two more all with the help of such players like Dale Standifer, Jimmy Doss, and Vernon Burke. The ex World-War II fighter pilot held his own against some of the most memorable Kern County coaches like Paul Briggs, Migs Apsit, Ray Frederick, Marv Mosconi just to name a few.

Turk came to North High by way of Shafter High School, winning 24 games in just three years as the Generals’ head coach. He grew up in McGill, Nevada and starred at Nevada-Reno as a blocking back for Marion Mortlet. As a fighter pilot, he shot down four enemy planes before his own plan was shot down spending more than a year in a German prisoner of war camp. After the war, he returned home and married his life partner, Frances “Cookie” Cook, completed his education at the University of Nevada and the University of Southern California, and, became a teacher in and out of the classroom.

Turk had dual interests in his 32 years at North High-his football team and his mathematics classes. He felt like he had the best of both worlds as a high school teacher, bringing math’s accuracy to the football field, and, football’s passion to the classroom. His ex-football players and students remember him as both emotional and inspirational. He taught them about football and math, but even more about life. He taught them to believe in themselves and the value family and friends most of all.

Vernon Burke, an All-American at Oregon State before a pro football career, was arguably Eliades’ most accomplished athlete, and, he recalls that the coach “taught me to be mentally tough and never, never give up. He coached all his players with equality and fairness, looking inside them to see strengths they never knew they had. He drew out those strengths leading his players to levels way above their abilities and skills”.

Eliades also encouraged his players to have larger perspectives, recognizing that football was only part of his own life-along with family, friendships, teaching and other factors equally or more important. Clete Harper remembers Turk telling his players, “As important as this game is tonight, football is only a temporary part of our lives, but, what we gain from it will be with us for the rest of our lives.” Turk also made sure his players knew that replays are rare in life. “You can never play this game again”, he would tell his teams. “Live your life to be the best that you can be”.

Ninety-year old Jordan “Turk” Eliades looks forward every year to his annual fishing trip to June Lake with a group of ex-players now in their 50’s and 60’s who consider it an honor to be one of “Turk’s boys”. He also tutors algebra students and continues to “employ football and math to prepare generations of students for lives that may at times be beyond their control, but in which integrity can always be theirs”.